Appreciating Spring Tulips Near and Far 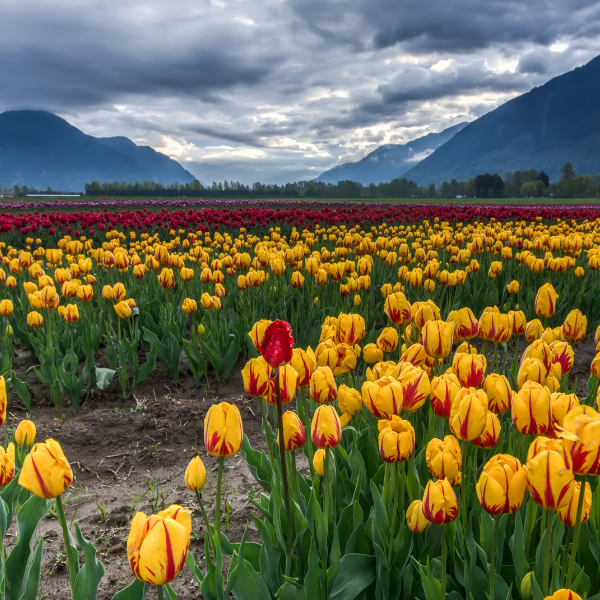 Spring is upon us and we at Nautical Wood Maps see that as a wonderful opportunity to celebrate tulips and the places they grow in abundance!

Tulips are bulb plants that flower in spring and become dormant in the summer. They originated in Southern Europe and Central Asia, but have since been naturalized in many countries and regions around the world, including Skagit Valley, WA, Holland, MI, and, of course, the Netherlands.

Tulips originally made their way to Washington State through George Gibbs on Orcas Island, who bought $5 worth of flower bulbs in the late 1880’s and watched them multiply over two years. This was the first sign of great potential for tulip growth in the region, which eventually blossomed into a 10-acre growth field supported by the Department of Agriculture. The Bellingham Tulip Festival was born from that first field in 1920 and ran up until the Great Depression. Since that time multiple growers have made their home in Skagit County, where for 30 days every year hundreds of thousands of people gather for the Skagit Valley Tulip Festival.

Still, the largest tulip festival in the United States is Tulip Time, held annually in the city of Holland, Michigan. Tulip Time dates back to 1929 and originated when a city beautification project led Lida Rogers to suggest the tulip be adopted as the city’s official flower and be planted in local parks. The city council imported 100,000 bulbs from the Netherlands and invited people to come and see the tulip blooms the next year. Tulip Time now boasts over five million blooms and festivities including their own outdoor concert called Tulipalooza!

Holland, Michigan got its name from what we consider to be the true home of the tulip: the Netherlands. Tulips were introduced to the Netherlands in the sixteenth century and became so expensive that they were actually used as currency for a time. Most of the tulip farms in Holland are located in the Noordoostpolder which boasts nearly 2500 acres of tulip fields. Keukenhof (the largest flower garden in the world) and the Kop van Noord-Holland (location of the world’s biggest single flower bulb field) both boast millions of tulip blooms, truly making Holland the undisputed epicenter for tulip growth and well worthy of its name, “the flower shop of the world.”